I rarely start a match report with a quote – it comes across a bit pretentious, but for today’s, it feels appropriate:

“As I understand the breed, he is one who has not merely braced his muscles and developed his endurance by the exercise of some great sport, but has, in the pursuit of that exercise, learnt to control his anger, to be considerate to his fellow  men,  to   take no mean advantage, to  resent as dishonour the very suspicion of trickery, to bear aloft a cheerful countenance under disappointment, and never to own himself defeated until the last breath is out of his body”
NL ‘Pa’ Jackson – Founder Corinthians FC

When The Corinthian Club were formed, it was with the strict ideals of amateurism and the “Corinthian Spirit” in mind.  They have left such an indelible mark on football – both at home and abroad – that they directly led to the formation of the esteemed Corinthians of Sao Paulo, and are the reason Real Madrid play in white today.

The club merged with The Casuals FC in 1939 and throughout the age of professionalism, they have maintained their amateur roots.    Because of this, for a number of years I’ve been intrigued by Corinthian Casuals.  It’s no secret that ever since the dawn of professionalism in football – and sport in general – money has had more effect on success that any other single factor.  The word amateur in sport is often taken as a synonym for inadequate or rubbish.  The true meaning is much more important – a player, and team, who play the game for the love of it, and not for financial ends.  In today’s environment – where an unnamed team in the Bostik Division One South spent £9,000 per week on player wages – it is an incredible achievement that this club continue to survive, and indeed thrive, whilst paying no salaries or expenses to players.

So, the visit of league opposition in Bristol Rovers (brought about through Chairman Steve Hamer’s connections to Casuals) found me down at King George’s Field in Tolworth, on a balmy late July evening.  Thanks to the generosity of Stuart Tree, the Press Officer for Casuals, I got in without the £10 ticket price, bought a (fantastic and award winning) £2 programme, and settled down to my cheeseburger, chips and Diet Coke (£5.50).  Fair play to Rovers by the way, who brought a lot of fans up from Bristol (and South Wales) for a Monday night friendly between their kids and a Bostik League side.

Having been offered “Press Access” by the club, I donned my hi-vis jacket (thanks to my girlfriend’s dad) and set off for the touchline by way of collecting a teamsheet.  Unfortunately, at this point I ran into my first encounter with a non-league pre-season issue.  With Casuals not paying players, they are often victim to scouts at their friendlies poaching their best players.  Having already lost last nine players this summer, manager James Bracken (youngest non-league manager) opted not to publish a teamsheet.  The result being the Casuals players took to the pitch in some sort of footballing witness protection scheme.

One player who certainly would not be playing was 21 year old Shaun Okojie, scorer of 40 goals in 39 games last season.  He has departed to Aldershot Town in the Vanarama National, after turning down overtures from League clubs in favour of playing time under Gary Waddock.

As the teams came out, it was immediately apparent that Bristol Rovers had brought a very, very, very youthful side.  Captained by Rollin Menayese, a 19 year old Welsh youth international signed from Weston-super-Mare, and featuring a new signing from local Hampton & Richmond in the form of Charlie ten-Grotenhuis.  It would be easy for the travelling fans to feel slightly deflated, but the opportunity to watch the next generation is always welcome.

Unfortunately for the League One youths, the game rapidly settled into a case of men versus boys, with the Corinthian Casuals players dominating from the off.  It was no surprise, therefore, when they took the lead on 13 minutes.  The Casuals’ number 11, club legend Jamie Byatt was brought down on the edge of the box.  Byatt has played over 300 matches for Casuals, and can lay claim to being the only English player to play for the Brazilian Corinthians after a ten minute appearance for them in 2015.

History lesson aside, up stepped Casuals number 10, Josh Uzun to whip an un-saveable free kick right footed into the corner past Thom Jonkerman in the Bristol Rovers goal. 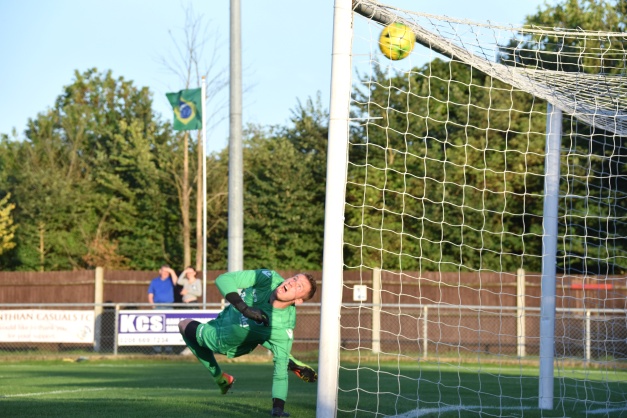 It was a lovely goal to open the scoring, and resulted in much exultation in the Casuals’ casuals behind the goal.  One fan in particular was delighted, brandishing “The Famous Luigi” aloft like a flag bearer at Waterloo.

The game continued apace, and settled into a rhythm of Corinthian Casuals dominating, and eventually stretching their lead.  The goal was clearly coming, and on 40 minutes Menayese brought down Casuals’ number 9 – a summer signing named Gabriel (didn’t catch his second name) – to enable Uzun to score from the spot, doubling both his and Casuals’ tally.

Bristol Rovers weren’t without chances though, and Corinthian Casuals’ mystery keeper was forced into making good save by a header from a corner.  At half time, the score was a well-deserved 2-0 to Corinthian Casuals, with Josh, Gabriel and Jamie (I’m settling for Brazilian style single word monikers due to the club’s relationship with Corinthians) causing myriad problems.  In all honesty, the Bostik side’s pace and power was too much for the youngsters, who couldn’t catch a break at the other end, where the Casuals defenders mopped up everything the triallist centre forwards Hird and Scott could throw at them.

In the second half, the Pirates came out looking to make a comeback, and had a header cleared off the line early on.  As with the first half, there was one player who stood out for Rovers, diminutive number 8 Cameron Hargreaves from Exeter.  Hargreaves is the son of U23 manager Chris Hargreaves though no argument of nepotism here (it’s certainly not another Anthony Pulis situation) as his technique in possession was noticeable and he was busy throughout.  Rovers’ fans can surely expect to see him receive some league minutes this season.

The number 7 (absolutely no idea who he is – his identity’s better protected than Henry Hill) for Corinthian Casuals was the dominant force in the game, providing the platform for the attacking trio to work from.  However, it was that forward triumvirate who brought about the next goal when (I think) Ben Morgan brought down Byatt resulting in a second penalty, and once Josh Uzun got involved it was hat trick, 3-0 and goodnight.

Throughout the match, numbers 9, 10 and 11 were too pacey, powerful and (in 10’s case particularly) skillful for the Rovers defence.  However, Corinthian Casuals have not just put together a team of flat track bullies.  Once the teams came out, I expected the adults to have the best of the physicality, but they also outplayed their (admittedly youthful) professional opposition for 80% of the match.

The one black mark against number 9’s day was when he was sent clear through on goal and proceeded to scoop a woeful – genuinely woeful – attempt at goal, which was easily gathered.  Douglas Bader honestly could have done better.

At this point I should also say that for a Monday night fixture, Corinthian Casuals had quite vociferous support.  Around 180-200 people turned up to watch, and the home fans were boisterous, vocal and funny throughout, and had some of the best flags I’ve seen at any ground.  Songs about Tolworth Tower and the Chessington train line which “raced” past in the background added a nice local flavour to proceedings.

Despite Casuals’ strong performance, Bristol Rovers had the best of the final ten minutes, with substitute number 20 (didn’t get the name) racing on to a long ball and looping a nice finish over the ‘keeper for 3-1.

It could have been even closer, but a last minute cut inside and shot from the Pirates’ number 14 slammed against the foot of the left post.

As the final whistle went all the Corinthian Casuals players went over to the fans to celebrate a cracking result against League opposition.  It may only have been the kids, but they were still kids who brought with them an absolute entourage of staff and the professional set up was very apparent.  Congratulations to Casuals who must head into their final pre-season friendly against Crystal Palace U23s full of confidence.

Losing Shaun Okojie is a massive blow, of course, but if new boy Gabriel can pick up some of the goal scoring burden, they could well challenge for the Play Offs again this season.

Any photographs or text produced on this website remain are copyrighted and remain the property of the author.  If you wish to use any of this material, please contact me as I may be willing to give permission.  If you would like to obtain copies of photos for use without watermarks please contact me.