The football season began in earnest last night, with two Championship games kicking off, so I really regard this Saturday as the first weekend proper of the football season.  Therefore, in a week where football went properly mental at the upper echelons with Neymar moving for £200m, it felt appropriate that I would be spending my Saturday watching the Extra Preliminary Round of the oldest, and some would say best, cup competition going – the FA Cup.

I decided to take in this round at a club I’ve visited before – Chessington & Hook United.  The club have been very supportive of my blog, and in Andy Ellis and Darren Woods they have a management team who really give their all to make the team competitive.  Playing in Combined Counties Division One, a number of their rivals pay players and expenses, but Darren relies on creating a strong team ethos and an environment that people want to play in.  You can see the results of this, with players travelling from sizeable distances, and – in the case of Bas Morally, for example – turning down paid offers from other clubs to remain at Chalky Lane.

The club have signed some good players over the summer, and speaking to the manager pre-match, he’s confident he’s put together a side that will not only challenge for promotion, but hopefully be title contenders this year.  On another note, Chessy do the best burgers I’ve encountered at a non-league ground so far – their cheese and bacon burger coming in at £3 is a great way to kick a diet into touch.

Onto today’s opponents – Lancing FC.  Hailing from Lancing (funny, that) in West Sussex, they play in the Southern Combination Premier Division, one league higher than Chessington & Hook.  Under manager John Sharman they will be hoping to recreate their best FA Cup performance – a 4th Qualifying Round appearance in 1952-3.  After an absolute dogs dinner of an attempt by the coach driver to get them into the car park, the team and fans emerged ready for the match.

Chessington & Hook United have a prolific academy, and have bolstered their side with four players from last year’s Cup Finalist U18s, including George Isaacs (winner of the Club Young Player of the Season), Jordan Welby and Ben Thorne.

The teams came out in glorious sunshine, with mascots and everything.  The FA Cup is clearly a big deal at every level it is played, and there was a good atmosphere at Chalky Lane, where probably just over a hundred people had gathered to watch the match.  Upon kick off, it didn’t take long for Chessington & Hook to offer a statement of intent, when Kie Robinson broke down the left and crossed, but no one was in the middle to take advantage.

That was the second minute, and it’s fair to say Lancing didn’t really wake up until quarter of an hour had been played, by which time they were two goals down.  After four minutes, Bas Morally – a midfield dynamo at the centre of everything good about Chessington & Hook’s play today – took advantage of confusion caused by a long throw in, and slotted in from the edge of the six yard box.

Then with 11 on the clock, number 11, Kie Robinson chased down a fine long ball from no.1 Josh Wyatt.  The Lancing ‘keeper rushed out, but wasn’t fast enough to beat the rapid Robinson, who nicked past him and slid the ball into an unguarded net.  2-0.

The margin could – and really should – have been three or four by the break.  Chessington & Hook had the lion’s share of the first period, and spurred on by the quick distribution of Wyatt in goal, were a real threat with early balls in behind for Robinson and Peters to chase.  Robinson had the Lancing right back on toast for pace every time, and Peters was bustling on the opposite wing. 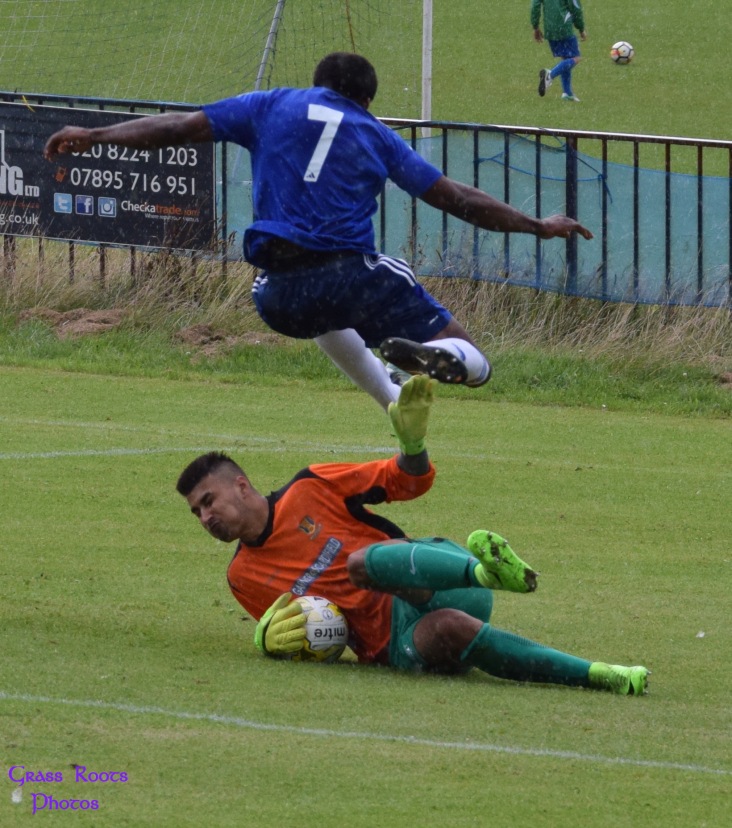 Lancing’s keeper out to deny Peters

A fine driving run from right back Kyle Green almost resulted in a third.  By now the weather had turned, and in howling rain Green chested down a loose long ball, strode up the pitch, exchanging passes with Godfrey Toko before drawing a good save out of the Lancing goalie.  This was one of a few missed opportunities, with Robinson in particular guilty of missing a few good chances.  In fairness, Lancing’s ‘keeper stood up well twice when faced with the left winger one on one.

But the Lancing ‘keeper is equal to it

Before half time there also time for an uncomfortable exchange for Lancing’s skipper Alex Bygraves, who took Toko’s studs to the forehead.  It was unlucky, and clearly no intent, but Toko still received a yellow card for his efforts.  So, at the half time whistle, Chessington went in 2-0 up against the West Sussex side.

Chessington & Hook had an early opportunity to extend their lead in the second half, with a whipped Morally free kick finding Cameron Peters at the back stick – unfortunately for him, his snapshot hit the upright and was smuggled to safety.

For some reason, after that, Chessy started to look sluggish.  Possibly the fact this is their first competitive game meant there were some tired legs, but Lancing had a very good twenty minute spell, and managed to take the game to a replay in that time.  A 55th minute goal by Lucas Tredeau got them back into contention, when Tredeau received a nice ball from his right winger and passed the ball into the corner.

Then, on 60 minutes, up popped Lewis Finney with the equaliser when Chessington left back Arafat Kabuye failed to shepherd the ball out.  His pocket was picked, and a low ball in to the penalty area was swept home neatly by Finney.

Chessington & Hook still had opportunities to take the win though, and substitute Fabian O’Brien – a summer signing from Farleigh Rovers, who had been unable to start after a week working night shifts – had some neat touches late on, dovetailing nicely with Robinson and centre forward Robbie Burns.  Burns himself had a Gazza-esque close call – his sliding attempt to connect with a ball across goal reminiscing of the teary Geordie at Euro ’96.

Chessy pushed on in search of the winner, but some backs to the wall defending – and solidity under the high ball from the ‘keeper that would have impressed Stuart Hogg – meant it was in vain.  So, 2-2 the final score, and a Tuesday night replay in Lancing beckons…

I think in all, Chessington will disappointed not to win, they were the better team and controlled the majority of the game, but were denied by a very impressive goalkeeping performance.  Although injured captain Dan Green will unfortunately still be unavailable on Tuesday, Chessington & Hook will hope that others returning to the squad, such as centre back George Isaacs, will help to swing the replay in their favour.