When Bognor Regis vs Oxford City in the Vanarama National League South was postponed due to an FA Cup clash between, erm, Oxford City and Bognor Regis, I found myself listlessly heading to the South Coast with no match to attend.  Carrying out brotherly duties, and visiting the youngest of the Grass Roots Tourist clan at university, I was committed to spending the weekend in Bognor Regis.  So, I scouted around, and found this gem of a clash in the Southern Combination Football League Premier Division – Sussex’s representation at Step Five of the National League system.

Nicknamed The Mullets in honour of the team’s commitment to reviving the 80s hair masterpiece (definitely nothing to do with the fish found in the nearby River Arun), Arundel are currently second from bottom in the division.  Managed by Richard Towers, last week’s win away to East Preston lifted them off the bottom, and a further victory against 7th place Crawley Down Gatwick could see them move up again.

Mill Road is a surely uniquely picturesque ground. Overlooked by the stunningly imposing Arundel Castle, this 2,200 capacity ground nestled in the rolling South Downs is a delight.  The only drawback of such a stunning location is the parking.  With Arundel Castle – the geographically confusing seat of the Duke of Norfolk – drawing hordes of visitors in the late autumn sun, matchday supporters are left with the difficult conundrum:  park miles away, pay £6 plus for the nearby car park, or take their chances in the Mill Road car park.   I opted for the latter, and spent the next two hours in fear that a wayward shot would smash my windscreen…

Tickets were £6, but thanks to Arundel’s Vice Chairman I received free entry in exchange for a pre-match team photo.  Unfortunately, due to a mix up entirely of my own making, I took a pre-match photo of a thoroughly bemused Crawley Down Gatwick squad, so, Simon – please take this as a public apology!

With a loudspeaker blaring out Motown classics, I went looking for my customary pre-match snack, and was delighted to find the option of a Double Cheeseburger.  At £5.00 it seemed steep, but when I started munching my way through and found approximately two thirds of a cow nestled within the bun, the value for money was apparent.  I expect I’d have thoroughly enjoyed eating it whilst reading the programme, but sadly printer issues had left the matchday programme nothing but a pipe dream.

Kick off signalled an initial fifteen minutes which promised a long and tedious afternoon in West Sussex.  A couple of late tackles by Arundel players aside, there wasn’t much to enliven the opening quarter of an hour.  On 17 minutes, though, one of the litany of early fouls by Arundel resulted in a free kick on the left hand side of the box.  This was swung in by CDG’s Captain, Dan Sullivan – the first of many good set piece deliveries from him – but no one was able to get a firm contact.

This seemed to spark the game into life, and over the next ten minutes both sides had good chances.  Sullivan had the ball in the net for Crawley Down Gatwick after an Oli Leslie shot was well parried by Arundel ‘keeper Lewis Boughton, only to see the flag raised (correctly) for offside.  Sullivan then had a gilt edged chance to score for real when Leslie delivered an inch perfect cross, but the skipper’s sliding effort was high, wide and handsome.

At the other end, Arundel’s winger Shane Brazil was threatening when in possession.  An absolute livewire, with great agility and balance, the diminutive winger’s close control and skill were brilliant to watch, but the end product was sadly lacking at times.  I was certain that if Arundel were to score it would be through him.

This exquisite prescience is exactly why no-one regards me as the non-league Nostradamus, as the scoring was opened on 28 minutes by The Mullets’ number seven, Lee Mottershead.  Nipping in to seize upon some loose Crawley Down Gatwick control, he looked up to see The Anvils goalie off his line.  Despite being fully 40 yards from goal, he whipped out the sand wedge, and chipped an impudent finish over the stranded Seb Bos to put Arundel 1-0 up.

The lead would lasted shorter than Katie Price’s singing career, as barely three minutes later a Dan Sullivan through ball found Leslie in space.  The tall, and exceedingly smiley #10 cut inside, made space on his right foot, and sent a shot into the far corner past the unfortunate Boughton, who had already made some good saves by this point.  1-1 – game on.

Three minutes on, and CDG’s Sam Packham also saw a goal chalked off courtesy of the linesman’s flag.  A long ball was flicked on, and Packham reacted to said flick with one of his own – over the goalkeeper and into Arundel’s net.  Again, the assistant referee got the call correct, and the parity was maintained.  This proved to be the last notable event of the half, and the referee’s whistle sent the players into the changing room with the scores level.

The first half had established in my mind that Crawley Down Gatwick’s Dan Sullivan and Oli Leslie would have a massive influence on this match, having already got an assist and a goal between them, and the second half solidified the impression they made on me.  Another player who I liked the look of in the first 45 was Brazil, and he created the first good moment of the second period.  On 53 minutes, a tricky, winding, pacey 50 metre run down the right wing was only brought to an end when Bos came out to smother the danger.

Around five minutes later came possibly the best goal I’ve seen live at any level of football.  When the ball broke to Arundel’s Captain, and top scorer, Josh Biggs, in the centre circle no danger was evident.  In fact, even an audacious lob looked out of the question given Bos’s position a mere four or five metres from his goal line.  However, not to be outdone by Mottershead, Biggs drilled a shot from just shy of 50 metres.  The ball flew towards the goal and it was immediately apparent the trajectory was arcing for the top corner.

Bos backpedalled, but to no avail, and the shot clipped the bar and went in – leaving Arundel 2-1 up, and me feeling all kinds of dirty watching such filth in public. 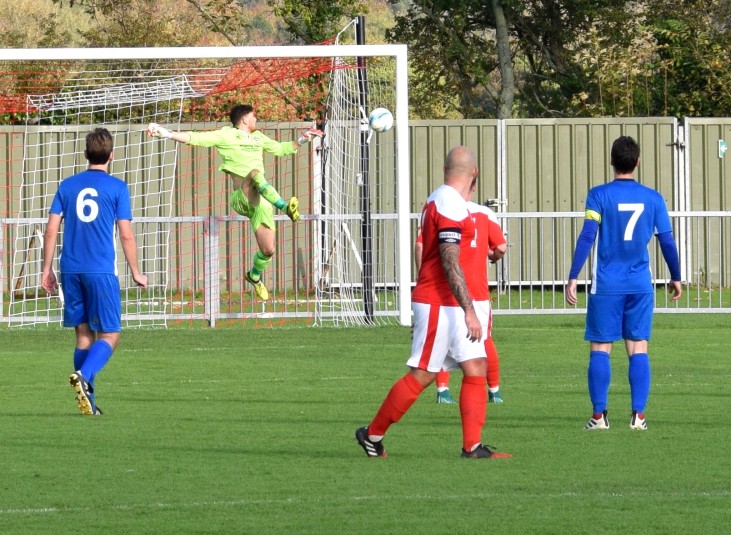 The ball nestles into the corner…

On any other day, Dan Sullivan’s seventieth minute equaliser would have easily won the coveted prize of Best Long Range Goal By A Captain, but Biggs’ effort was so spectacular, that Sullivan’s free kick will have to settle for second place.  Still, when Elliot Dollner’s foul halted Michael Spence’s run five yards outside the box and central, Sullivan lined up the free kick looking all kinds of confident.  For some reason, my spidey senses were tingling, so I focused on Boughton and the Arundel goal.  So it was, that I was perfectly positioned to watch the ball whip into the top left corner beyond the ‘keeper’s athletic dive, as Sullivan evened up the scores.

From this point on, Ed Sheeran’s younger brother, who is apparently a SCFL referee, came to the fore.  Seemingly submitting his decision making process to chaos theory, his decision making became increasingly spurious.  The culmination being a yellow card awarded to Arundel’s skipper for having the audacity to be fouled himself.  Of course, Arundel’s right back Luke Heffron will feel his red card for dissent to be the strangest decision.  I can’t comment though – it was so unexpected, I didn’t even see it.  It wasn’t until I heard Heffron holding forth on the issue post-match that I even realised it had happened…

As we entered additional time, Crawley Down Gatwick began to turn the screw.  A wonderful 91st minute save by Boughton, where he tipped a close range header onto the crossbar and over reinforced upon me how impressive his performance had been.  Unfortunately, he and his teammates ended up losing the point they deserved in the 96th minute.

I can only assume that the referee’s watch had stopped, because there is no way under the sun that this match had incurred six minutes’ worth of stoppages.  However, deep into Fergie time and it was that man Leslie again.  From Sullivan’s cross, the ball was headed back across goal, where Leslie timed his jump perfectly, and the ball clipped off the crossbar and dropped tantalisingly out of Boughton’s reach.

A frantic minute later, and time was up, leaving Arundel on the receiving end of a cruel, and in my opinion, unjust defeat.  They had earned their point, and the addition of some unexplainable minutes cost them just that.

So Paul Cooper’s team will head back across the Downs with all three points, as they look upwards at the top of the table.  The visitors performed well today, and in Oli Leslie and Dan Sullivan had probably the two best performers on the day.  They will feel their three points were well deserved, and any team who can snatch the victory at the death have shown a will to win that will serve them well across the season.

However, I personally feel that a draw would have been the fair result – Arundel fought hard, and when able to get the ball on the ground played some lovely football.  Lewis Boughton is a good shot stopper and sweeps his area well, whilst Shane Brazil’s ability to make the ball appear glued to his feet is remarkable.

Unfortunately for Richard Towers and his squad, football is an inherently unfair game, and when you’re luck is out, it’s really out.   The right bounce, the right calculation of time by the referee, and things could have been so very different.

Any photographs or text produced on this website remain are copyrighted and remain the property of the author.  If you wish to use any of this material, please contact me as I may be willing to give permission.  If you would like to obtain copies of photos for use please contact me.