After a month away from non-league football, photography and blogging (not out of choice, I may add…) I was back in the saddle for one of my few remaining evenings in London before heading home for Christmas.  Having started last month’s missive talking about Dave Tarpey, I thought it only appropriate to get back on the horse at another of his former clubs – Walton & Hersham FC.

Walton & Hersham FC, or The Swans to their mates, were formed in 1945 by a merger of Walton FC and – yup, you guessed it – Hersham FC.  Over the next 72 years, the club has seen players of the calibre of Nathan Ellington pass through the ranks, but it’s the boardroom where The Swans have truly been graced by football royalty – the late, great, Sir Stanley Matthews is a former President.

Based in Walton-on-Thames, Surrey, The Swans are currently sitting 4th in the Cherry Red Records Combined Counties Premier Division – another delightfully named league which requires a deep breath prior to saying out loud.  A win today would see them up to 3rd, a great position to challenge for promotion considering the league expansion at Step 4 next season.

Walton & Hersham play at the Xcel Sports Hub, a £20m sports complex (thanks Wikipedia) shared with local Isthmian South side Walton Casuals.  Having only moved there this summer, after what was described to me by a local as “something of a forced eviction”, the 2017/18 season is something of a bedding in period for The Swans.  However, flying high in the league, they’re doing it remarkably well compared to some much higher profile clubs who have moved stadiums recently…

And what a lovely pitch it is – immaculate 3G, and as a result one of the few grounds to successfully hold fixtures in the current weather, I genuinely can’t see the logic behind continued arguments from certain non-league personalities against further introduction of 3G pitches.  I can now see the reason for the club’s slightly smug tweet to me earlier in the week regarding their confidence in this fixture going ahead!  Whilst admiring the pristine playing surface, I treated myself to some pre-match scran, to ward off the inevitable man flu I would get as a result of watching the game in temperatures more suited to Winterfell.

A cheeseburger and chips, plus Diet Coke, ran to £6, and along with a £1.50 programme, the overall outlay of £15.50 is not inconsiderable for a Step 5 fixture, however, both the match, and the chips, were thoroughly worth the price.  Whilst the food overall wasn’t to Worcester Park FC’s lofty standards (still the best food I’ve eaten at any football match…), the chips were different gravy, and have moved assuredly into my top spot for sports ground chips.

Around 90 supporters had gathered inside the Xcel Sports Hub to watch this match in the near freezing weather, and when proceedings got under way Farnham’s goalkeeper Ryan Hall was the first player to impress.  Looking like he may have recently finished his Year 9 SATs, the No. 1 athletically, and acrobatically, tipped centre forward Flo Bojaj’s header over the bar after only 60 seconds.

To add insult to teenager-inflicted injury, Farnham then went straight up the other end and took the lead.  When right back TJ Nkoma missed an interception on a long cross field pass, it looked as though he’d recovered to avoid danger, pushing the recipient wide.  However, an excellent cross into the box found Ashley Peck lurking, and the former Alton Town man made no mistake at the near post.

For the next forty minutes, it looked for all the world as if Farnham were going to play the perfect game to secure a smash and grab in the sleety drizzle.  Chances came and went for the promotion-chasing Swans, and Flo Bojaj, Abdeen Abdul and Sam Shaban up front were causing all manner of problems.  On 13 minutes Shaban let fly from the edge of the area, only to see Hall make another excellent save.

Whilst I don’t know how old Hall actually is he (and a lot of the Farnham team, in fairness) looked very young, and it was commendable how confident he was on the pitch, more than comfortable holding onto possession, and making several good saves.  Of course, if he turns out to actually be about 30, and just has the face of Ole Gunnar Solskjaer, then this is becomes slightly less noteworthy.

On 30 minutes, a crucial event took place for Farnham’s backline.  A clash of heads between Sam Shaban and Farnham centre back Josh Tarrant, resulted in a nice lump for Shaban, but Tarrant’s night was over.  He left the field and was next seen walking back to the changing rooms, chaperoned, with a large bandage around his head.

Tarrant was having a good game up to this point, and was marshalling the defence well, so it’s undeniable that his injury had an impact on the outcome.  However, I don’t believe that he, or his willing comrades in the back five, could have kept Walton & Hersham’s forwards out indefinitely.  Between them their movement, strength and close control – and Abdul’s pace in particular, were great to watch.  Without a moment’s hesitation, all three of these players would score goals in the Isthmian League.

The first of the trio to trouble my notes significantly tonight was Mr Abdul.  On 40 minutes, a fine corner was met by the No. 9, a good foot above his nearest challenger, and his header soared into the corner.

The teamwork between the three was genuinely exceptional at times, and only two minutes later, Abdul turned provider.  Finding space in the midfield third, he slipped a sumptuous through ball into the path of the rapid Sam Shaban.  The forward, who spent the early part of 2017 in Lithuania with Dainava Alytu, had no problem slipping the ball past the onrushing Hall to put The Swans 2-1 up.

Almost before the by now out of breath referee had chance to put his pen and pad away, Farnham had levelled the scores again.  Jack Dillon was the man in the right place at the right time, when a deep corner was drilled back into the box.  His one touch finish may have been offside (according to potentially partisan home supporters), but the crucial fact was that heading into the half time break, the scores were level.

Or rather, they would have been, had the absurd finale to the first period been complete.  As it was, former Albanian U17 international Bojaj got in on the goalscoring act.  I must say, that as much as I enjoyed watching Walton & Hersham’s attacking threesome, up until now, it was Bojaj who had impressed me the most.  His close control and core strength on the ball were fantastic.  It was these two attributes which led to his goal on 45+2 minutes, when he danced past two players on the edge of the box, before curling in a left footed strike.  3-2 and half time.

It took only five minutes of the second half for Walton & Hersham to extend their lead, and it was Abdul to the fore once more.  His ability to time a jump is yet another string to the striker’s bow, and it was another headed goal, in off the crossbar this time, which took the score to 4-2.

For some reason, this seemed to be a signal for the home team to lose any sort of fluency and rhythm to their play.  A side who had been characterised by Chris Onoufriou and Howard Newton playing tight to Bojaj, who in turn was close to Shaban and Abdul up front become distanced.  All of a sudden, there was a huge gap between the front three and everyone else, and the incision on the passing disappeared.  Farnham capitalised on this, and started to exert some decent pressure of their own.

However, despite Town’s best efforts, and a couple of ridiculously lazy passes straight to the opposition – particularly by centre back Jim Fenlon – Walton & Hersham dealt comfortably with everything Farnham could produce.  Jake Newton, brother of Howard and fellow Guyanese international, was imperious, and both Julian Hornby and TJ Nkoma were pacey and confident outlets on the flanks.

On 75 minutes, an ugly flare up, featuring Farnham striker Pascal Thornton and Jake Newton (in addition to 18 other players) resulted in both players getting yellow cards, despite vociferous calls for Thornton to be shown his marching orders.  I heard something about a “vicious elbow”, but must confess that the rain had worsened at this point, so I was more focused on waterproofing my camera.

The incident also resulted in Farnham reducing the arrears, when the free kick which followed was lofted into the box.  The extensively limbed Thornton brought the ball down, and in a somewhat scrambling fashion, bundled it into the far corner past the helpless Brendan Norris.  4-3, and all to play for.

Farnham did what they could to muster an equaliser, but I have to give credit to the way Walton & Hersham handled the last quarter of an hour, and particularly stoppage time (which lasted somewhere between 4 and 17 minutes…).  Bringing on two rapid wingers in Athan Smith-Joseph and Malachi Thomas, they succeeded in holding onto the ball high up the pitch and running down the clock.  Smith-Joseph was particularly adept at this, personally managing to see out at least two minutes evading capture by the corner flag.

When the referee did eventually blow his whistle, it was to signal a well-deserved, and thoroughly entertaining 4-3 win for The Swans.

Three points sees Simon Haugney’s team up to 2nd in the league, at a ground which must surely be starting to feel like home.  With Westfield looking likely to run away with things at the top, 2nd place is still very much up for grabs in this league, and as we get towards the New Year, it looks like Bedfont Sports, Walton & Hersham and Sutton Common Rovers will be duking it out right to the wire.

I really enjoyed watching The Swans play, and found their style of football very appealing.  It’s also a style of football which I think would suit them well in the league above – based on quick movement and possession.  It was a shame that the side seemed to lose momentum towards the end, but I put this down to a great effort by Farnham.

In an away match, in the freezing rain, in mid-December, Farnham showed no little amount of grit and determination in not only taking the lead, but then repeatedly getting themselves back into contention.  Although they are low down the table in 18th, surely Paul Tanner will have them looking up the table, rather than down it.

I’ve discussed most of the individual performances already, but I would nominate Abdeen Abdul as my Man of the Match (a coveted award, I know…).  He was part of a potent attacking line up, but due to his movement, strength, aerial prowess and vision, ended the game with two goals and an assist – a good evening’s work. 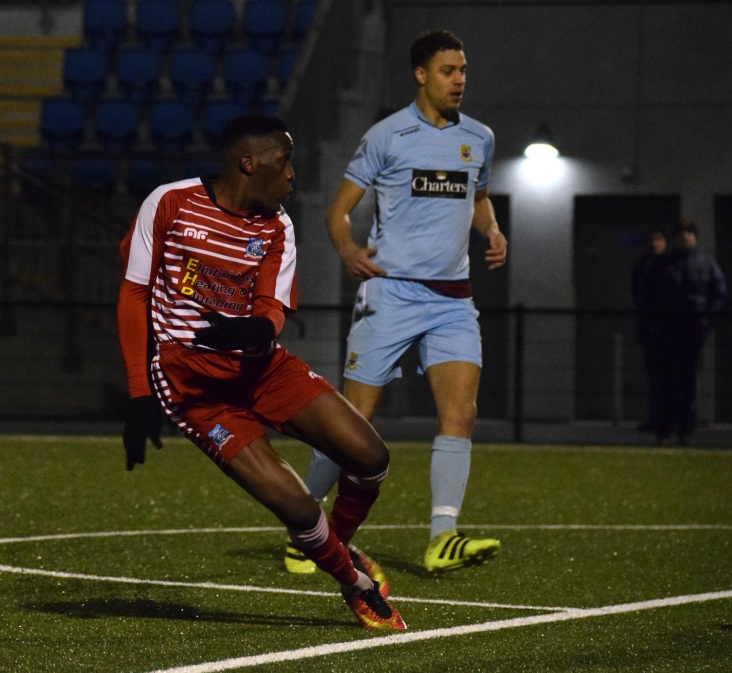 …and seeing a shot tipped wide.

Any photographs or text produced on this website are copyrighted and remain the property of the author.  If you wish to use any of this material, please contact me as I may be willing to give permission.  If you would like to obtain copies of photos for use please contact me.

One thought on “Walton & Hersham FC”