I’m sure there are some people out there who don’t spend their Bank Holidays watching non-league football, but I can only assume they wish they were.  After a Saturday watching Plymouth Argyle move to second in the EFL League Two, I was back on the non-league horse on Bank Holiday Monday, in the midst of an August heatwave – and to make up for lost time, I went for two matches on the same day. 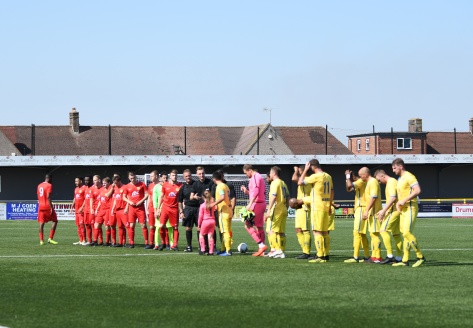 First up was a Cherry Red Records Combined Counties Premier Division fixture between last season’s runners up Sutton Common Rovers, and Banstead Athletic, at Gander Green Lane.  The Commoners – best known as SCR – were formed in 1978, and have been known by nore names than Sean Combs.  First up was Inrad FC, and then over a number of years Centre 21 FC, SCR, SCR Plough, SCR Grapes, SCR Litten Tree and SCR Kingfisher (down to sponsorship deals I believe…) before a promotion to the Combined Counties League.   This promotion coincided with a groundshare in Cobham, and another name change to Mole Valley Rangers.  This lasted until 2015, when the prodigal sons of Sutton football returned to their home borough in a ground share at Sutton United, also returning to the name Sutton Common Rovers.

Last season was their most successful ever campaign, finishing a record high of 2nd in Step Five, whilst also winning the League Cup (against CB Hounslow United), and reaching the final of the Southern Combination Cup as well.  In fact, were it not for the runaway success story of Chertsey Town, they’d be playing Step Four now.  Saturday also saw another first for the club, as they secured a place in the First Qualifying Round of the FA Cup, with a 3-0 victory over Eastbourne Town.  That said, they hadn’t started the league season as well as expected, with two draws and a loss.  Their visitors on Bank Holiday Monday had also started below expectations – Carl Taylor’s Banstead Athletic has lost their first three league fixtures, by an aggregate score of 11-0. 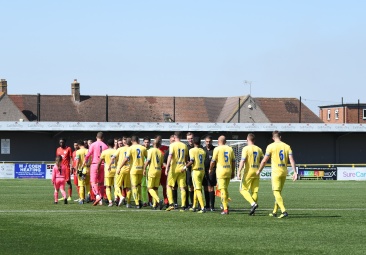 Banstead began their life in 1944, and finished 8th last season.  The A’s played Isthmian League football for over twenty years, before resigning their league position in 2005/06.  That drop to the Combined Counties preceded a further drop, suffering relegation in 2012, before regaining Step Five status as Division One champions three seasons ago.

Sutton United’s Gander Green Lane is a stadium I’ve visited on a number of occasions, and SCR are now in their fifth season as tenants there.  At £7 to get in it is consistent with most Step Five ground I’ve visited, and the programmes are typically of a high standard.  Unfortunately, they were double-header programmes this week, got sold out in the FA Cup Preliminary Round, and due to the Bank Holiday SCR were unable to get any printers to run off new copies.  So I settled for a couple of attempts on the SCRatch cards instead, to no avail.

Slightly more successful were my attempts to secure food, picking up a cheeseburger and Diet Coke for £6.20.  On a day when the mercury tipped 30°, I was also very grateful to SCR for allowing me into the boardroom for some water during the half time break…

The Bank Holiday weekend really is a slog for non-league players, who bang out two matches in 48 hours, whilst also fitting in actual jobs at the same time – and as such, it was no surprise that the match started with a slightly lower tempo than you might usually expect.  In the 6th minute Michael Eacott was the first ‘keeper pressed into action, when he rushed out to snuff out danger, receiving a late clattering for his troubles.  It was more work than Eacott would have expected to do today – he was meant to be on the bench, but starting goalie Ollie Ellaway injured his hamstring in the warm up.

Four minutes later, Nathan Ayling had the first chance for Sutton, when he hit a speculative volley from the edge of the area, which flashed wide.  Then, on 11 minutes, Mike Campbell had the ball in the net for SCR, but it was incorrectly disallowed for offside.  Louis Farquharson got on the end of nicely clipped ball over Banstead left back Archie Watkins, and looped the ball over David Trevino in the A’s goal for the onrushing Campbell to finish.  The linesman raised his flag, despite absolutely no one being offside in the build up.  It wouldn’t be the last time either. 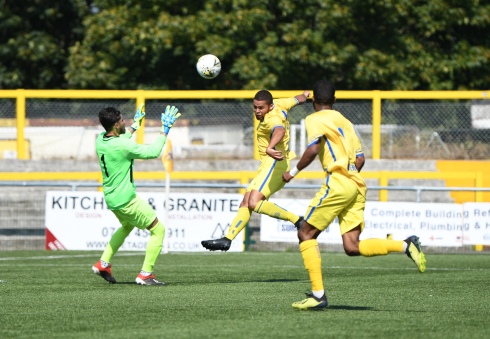 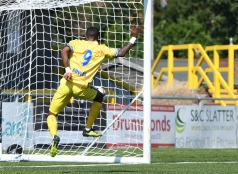 Mike Campbell is denied by the offside flag

The first quarter of an hour was dominated by Sutton Common Rovers, who were looking to play off the shoulder of the last man, using the pace of Mike Campbell and Daryl Cooper-Smith.  Unfortunately for the Commoners, the linesman on that side of the pitch had decided that he wasn’t running that day, and spent the first 45 minutes guessing at everything, resulting in a number of bad offside calls. 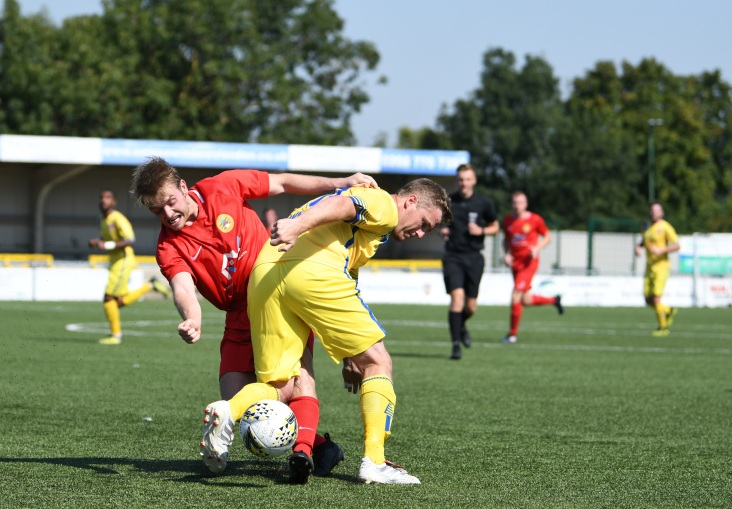 On 15 minutes Banstead had their first real chance, when a bad defensive header gave them a corner, which was headed over by the A’s.  Five minutes later, Daryl Cooper-Smith had his first chance of the match, when a delightful ball by Ayling found Liam Holden who nodded down to the former Parachute Regiment man.  However, like a true Para, he’s better in the air than on the ground, and the number 10 shot well wide. 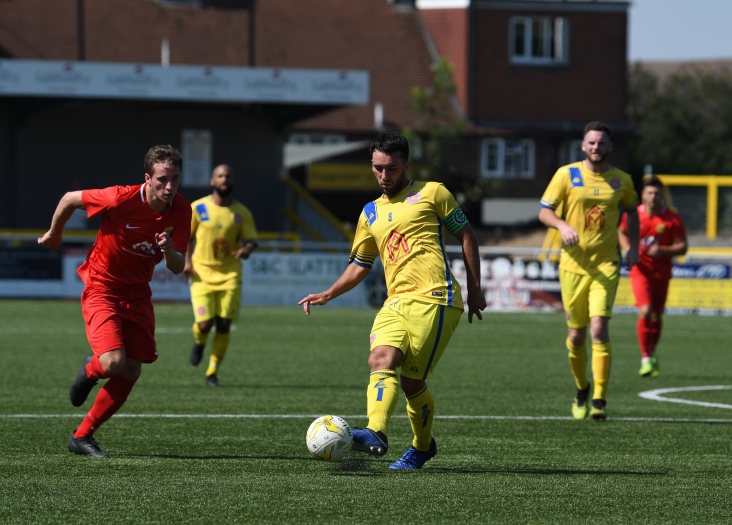 With 38 played, another very poor offside decision stopped a developing attack, this time it was Liam Holden stopped in his tracks.  Seemingly having realised that SCR were being called offside every time they played the ball in behind, Banstead moved to a seriously high line, which was then exploited by their hosts.  With five minutes before half time, another good pass by Ayling after he had turned well in midfield found Cooper-Smith in space, and he slipped a finish past Trevino in goal.  1-0 to Sutton Common Rovers, and – ironically – this time Cooper-Smith actually was offside… 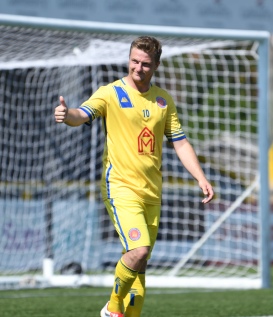 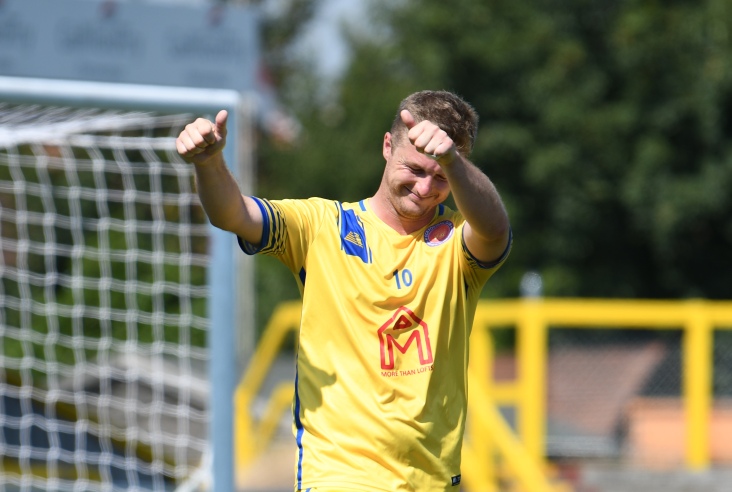 There was still time for more action before half time, as captain Matt Farrell shot wide after good work down the right by Farquharson, who was having a good half.  On the other flank, Matt Tanton was also looking dangerous from left back, but immediately before the break he almost gave away a penalty, when he slid in on Antonio Dembele after the Banstead man seemed to have got past him.

When the whistle went for half time, it seemed that 1-0 didn’t really reflect SCR’s dominance.  The home side had been in the ascendancy through, but just hadn’t been able to convert that into goals.  However, it didn’t take long into the second period to double the lead, as Tanton got the goal his performance deserved.  Farquharson sent a cross field pass over Steve Newman, which reached Holden, and he then knocked the ball into the path of Tanton, arriving late into the box.  The (probably) league’s only data analyst fullback took his first touch on the chest, and slammed a left footed drive into the net to make it 2-0.

It was immediately apparent how much more effective Sutton were with a competent linesman, who was actually calling the line correctly.  That said, a man with a hairstyle that intricate was always likely to have an eye for detail…

On 56 minutes SCR added to their lead, and it was Cooper-Smith acting as point man again.  This time the goal was made and converted by the centre forward, as he received it around 20 yards out, squared up his marker, beat him, and smashed in a low drive.  A fine shimmy and finish, which brought Cooper-Smith onto seven goals in his first five matches of the season. 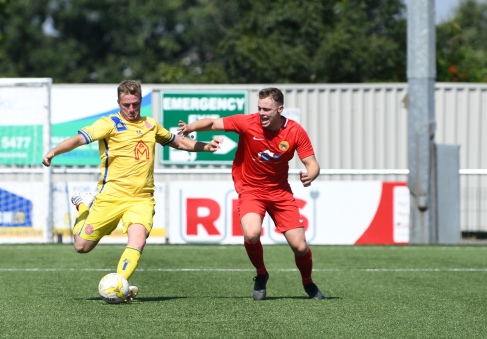 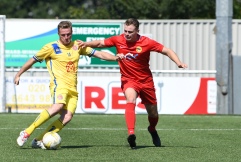 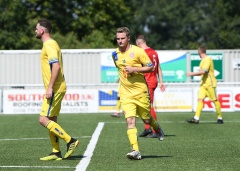 The striker was chasing his hat trick eight minutes later, when he was put clear in the box by his skipper, Matt Farrell, but on this occasion he took too long, and was robbed by a good covering tackle from Tom Mallett.  There was nothing Mallett – or anyone – could do on 66 minutes though, when Cooper-Smith turned provider for Mike Campbell to bag his third goal since returning to the club from Hendon in the summer.  SCR broke the offside trap so comprehensively all the king’s horses and all the king’s men couldn’t put it back together, and Cooper-Smith advanced in acres of space.  With one defender to beat, the number 10 unselfishly squared to Campbell, who coolly beat the ‘keeper for 4-0. 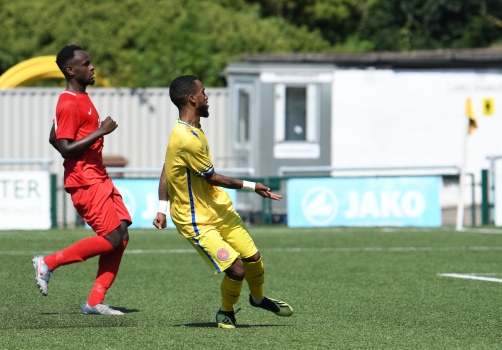 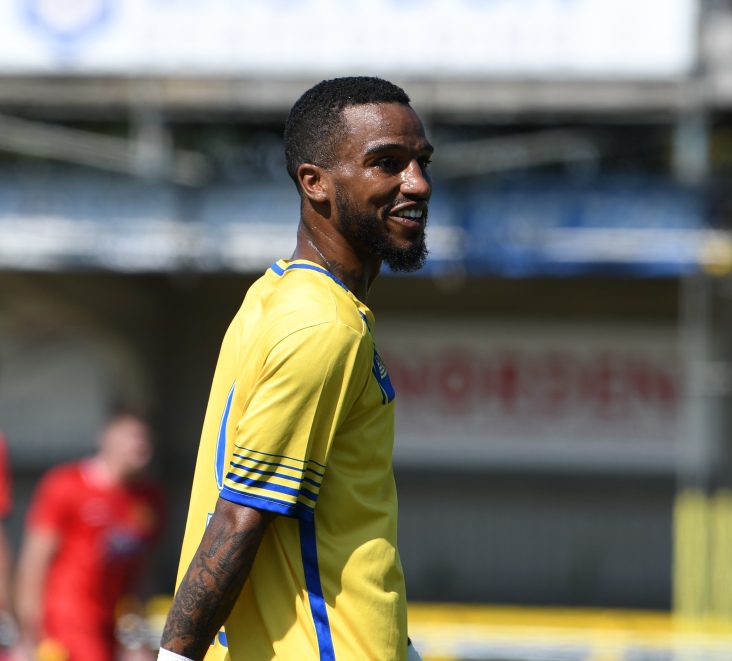 Campbell notched ten goals for Step Three Hartley & Wintney last season, and then moved to Hendon.  Due a change in work commitments, Campbell had to move once more, and returned to Sutton Common Rovers for what is (I think) the fourth time.  In him and Cooper-Smith, Danny Salmon has two strikers capable of hitting thirty goals each this season.  With twenty minutes left to play, and having made all their changes, SCR continued to press, and substitute Phil Page was looking dangerous down the right.  Mike Campbell forced David Trevino into a good save, whilst Mike Eacott pulled off an acrobatic stop to keep out a Dembele header on 72 minutes. 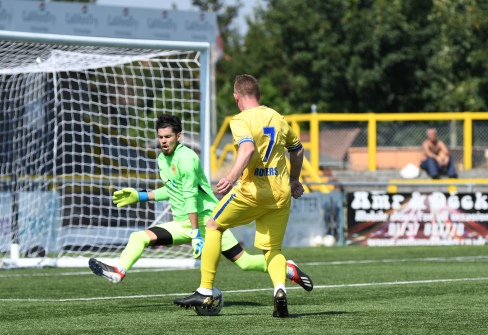 Shortly afterwards, Page was left unmarked in the box, and when he looked ready to pull the trigger, the former Farnborough man slipped in Cooper-Smith.  He Cruyff-turned his man, but shot wide left-footed.  That was the last clear sight of goal for either side, and whilst Sutton Common Rovers maintained their dominance, neither team managed to test a ‘keeper again.

In sweltering heat both teams performed admirably to produce a competitive ninety minutes of football, but it was SCR who put their iffy league start behind them, whilst Banstead’s miserable opening to the campaign continues – it’s now four straight losses with 15 conceded and none scored…

I haven’t written much about them today, but that is mainly in part to the dominance shown by the hosts.  The first half saw a dogged Banstead defence, as they packed their half, and they did well to stifle Sutton Common Rovers’ best attacking ideas.  Tom Mallett marshalled this well, whilst Tom Batten also dropped deep to provide protection to the back line. 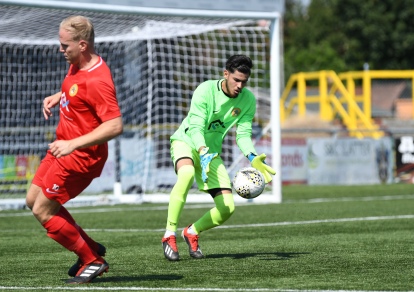 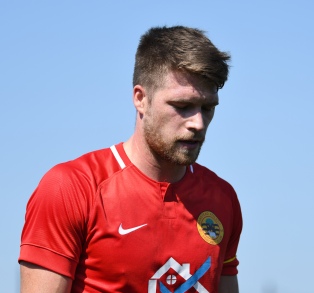 For the Commoners, there were a number of good performances across the pitch, particularly in the second half.  Craig Nelson – as always – was neat and tidy in possession, recycling the ball well, whilst Craig Hastings provided a calm voice from the back, urging patience when the attacking moves weren’t forthcoming.  Both full backs also performed well, whilst Daryl Cooper-Smith finished with two goals and an assist, even if he’ll feel he should have scored more.  Man of the match though, for me, is SCR’s left back, Matt Tanton.  He was full of running up and down the wing, and contributed effectively at both ends of the pitch.  His goal was fully deserved, and puts him on two for the season – after almost eighty matches without a goal.

Any photographs or text produced on this website are copyrighted and remain the property of the author.  If you wish to use any of this material, please contact me as I may be willing to give permission.  If you would like to obtain copies of photos for use please contact me.